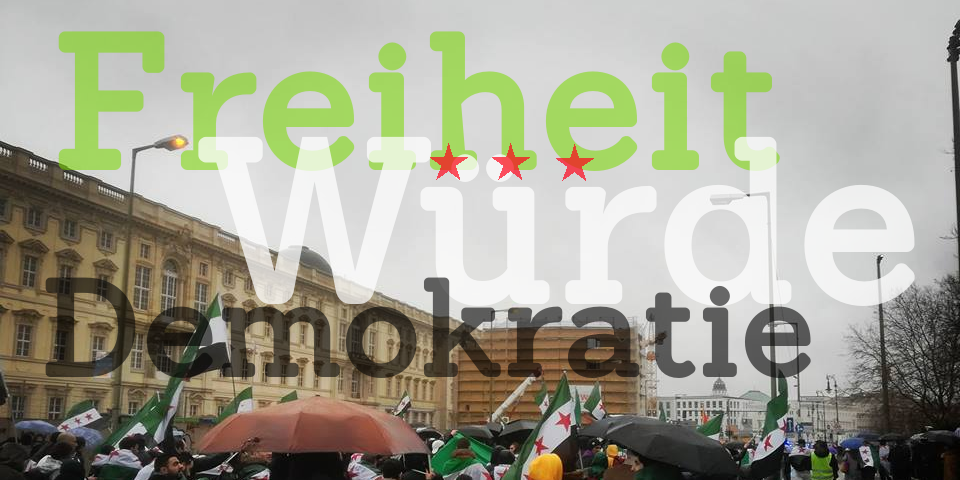 The interview was conducted with 10 Syrians. We want to document their thoughts and answers, because in all the debates about refugees, the ideals and struggles that are the reason for fleeing are all too seldom spoken of.

Why is it important to you to remember the revolution eight years after the Syrian revolution?

The people who sacrificed their lives in the revolution deserve to go out on the streets after eight years. With the demonstration today we also reminded that our desire for democracy and freedom is still burning. That we are ready to make further sacrifices. There is hope in Syria when they see that they are not forgotten.

Russia has recently started the discussion about the reconstruction of Syria and is talking about the return of the refugees. But Syria is now just a prison. We will not go back there. We only come back when we have freedom and peace.

Many refugees in Germany lost something eight years ago, they lost someone. Family members. With the memory of the revolution we want to express that we stand by them. That their victim will be remembered.

I want to show Russia that they have to stop bombing Syria. The killing is still happening even though there is an agreement between the regime, Turkey and Russia. In Idlib, Russia did not stick to it three days ago. They killed 75 people with phosphorus weapons.

I have lost friends and relatives. I believe that the revolution is the only way to get freedom and democracy and to live a dignified life.

Everyone deserves to be politically involved. We have only one party in Syria. It is similar to the GDR. Assad is also supported by Russia. For us, freedom is at the top: religious freedom, freedom of expression, political freedom.

What does the Syrian revolution mean to you?

She made me a man.

The revolution has shown us that there are no human rights in the world we live in. Nowhere in the world. There are no human rights, no women's rights, no animal rights. All is a lie. They bomb women, children and hospitals. The revolution has shown us the face of the world. The UN and all these organizations are liars. They talk but don't do anything. Law says: Whoever covers a criminal is himself a criminal.

The revolution has brought us out of Assads slavery.

Before the war it was said: the walls have ears. You were too scared to say anything. Now - after the war - people are no longer afraid because everything has been destroyed. There are no more walls. cynical laughter

The revolution and resistance have made it clear to us that we as a Syrian people live in a huge prison.

How is your life in Germany connected to the Syrian revolution?

My family is there.

It is a close connection. We think about the future every day and prepare for our upcoming role in building the country. We learn professions here, study. Nobody wants to be a refugee, believe me.

We are still heavily dependent on the revolution. The revolution is the future. If we see them fail, we can never go back.

We are free here. But we are not all here. Our families are in Syria. We have to work and achieve something for them here.

Before the war everything was dark. You can see the light since the revolution. This is life after death.

Following the news from the revolution is important to all of us. We all have family there. If something happens to our relatives, it doesn't matter what we have here. Then life here is hell.

The revolution stays in our head: the memory of the people we lost.

We keep thinking about our families. Why are we doing this? Because of the revolution. I'm here for them and not with my family. We are forced to feel the consequences of the revolution every day.

I regret nothing. We started a peaceful revolution, we cried out. But nobody helped us. The world has let us down.

By taking part in the demonstration today, we took a risk. If the regime sees what we are doing, they can punish our families. I posted pictures from the demo on Facebook. My family is going to get mad because they're scared.

We see here in Germany that people have a political life. This forces us to compare the situation here and in Syria. For example, how people criticize Merkel here. We cannot criticize Assad in Syria. We live a political life here in Germany: We inform ourselves. For example in the election campaign when the state parliament was elected in Mecklenburg-Western Pomerania in 2017. We have spoken a lot about the parties and their programs. A friend recently wrote to me in Whatsapp: "I envy you". shows the message.

In Germany, many people see the Syrian revolution as the 2011 uprising and thus over. You are talking about the present-day revolution.

Yes of course. As long as we stand for human rights, dignity and freedom, it remains our revolution. No matter where - no matter how long.

The demonstrations were special. Until people armed themselves, the demonstrations waned. Especially in Damascus, where I come from. People knew that the capital was important to the government and that it would not give it up.

The days when we went outside unrecognized and let out our desire for democracy and freedom were the best moments of my life. It felt like a slave freeing itself from captivity.

When Hafiz Assad took power, two of my uncles, aged 13 and 14, were tortured to death. The fact that the people who were tortured so badly went to the streets somehow surprised everyone.

Before the revolution, my father never told me about his time in Hafes Assad prison. He was in an underground room. Every day someone came and beat him. He never saw him because it was dark when he came. We could only talk about it through the revolution.

At the moment it is difficult to continue the revolution in the regions where the regime rules. I hate to say it: Many people in Syria want an occupation just to get rid of Assad. Like in Germany after the Second World War, for example Russia in the east and the USA in the west.

If you could wish, how should the Germans see the Syrian revolution?

The problem is, the Germans don't see what is happening to us. You only see what the media show. They don't think Assad is the criminal. They only see the Islamists as criminals. They are not Muslims, they are only criminals that Assad himself released from prison.

I want people to be more concerned. It makes us sad that today we are only seen as extremists. When I ask someone what they know about Syria, most of them say: Islamic State, Erdogan, Kurds. But where are the people? We are millions of peopl?. Where are we in this list? That stunned me. Many only want to keep refugees away from Germany.

The easiest way to keep refugees out of Germany is to support the Syrian people in overthrowing the regime. So that we can live in freedom. If everyone can have a worthy life in their home country, then nobody will come. Our problem is Assad.

We want the Germans to understand that the source of the terror is Bashar Assad. Most of the country was liberated in 2013. Then Assad released the Islamists.

Many Germans are influenced by RussiaToday and the right wing. The AfD was in Homs, in my hometown. But I can't go back there.

It's not just rights. Even leftists who think anti-imperialist. They think Assad is resistance to the West. Some members of the Left think Assad is against capitalism. I don't understand where hate against US in Germany comes from. The United States liberated Germany twice. Without the United States, all of Europe would speak either German or Russian today.

Some Germans think we're happy here. But we always think of home. You wouldn't see a Syrian here without war. You wouldn't have known us without the war.

I would like liberal democracy like in the West. It is not a Western invention. But in the west, they first found their way there. And that is exactly what we want to achieve. That everyone has freedom.

Freedom doesn't just come from peace. We cut down a tree that has grown for 40 years. People die under Assad and in the revolution. We are ready to make sacrifices to live in freedom.