Almost a year ago, asylum seekers from Mauritania in Rostock founded the association "Initiative pour la résurgence du mouvement abolitionniste - Allemagne" (IRA) - just one of the many exile representations of the organization, which was originally based in Mauritania. The "Initiative to Revive the Movement to Abolish Slavery" is committed to bringing the ongoing enslavement, exploitation and discrimination of large sections of the black and Harratin population in Mauritania in Germany into the public eye and to fight against it. On September 7, the IRA brought its request to the German Bundestag with a manifestation.

On the occasion of the arrest of the Mauritanian IRA President and United Nations Human Rights Award winner Biram Dah Abid, we spoke to Cheikhna Ntieh, member of the IRA Germany board.

Hello Mr. Ntieh, we recently heard about IRA President Biram Dah Abid being arrested again in Mauritania. What distinguishes the work of the IRA that its members have to fight repression again and again?

We see ourselves as an organization that denounces grievances and wants to help the people affected to exercise their rights. We are therefore illegalized in Mauritania. The government has been actively working against our organization since it was founded in 2008. Activists are repeatedly arrested for their political commitment, our President Biram Dah Abeid for the fourth time. Our organization is now the largest extra-parliamentary opposition in the country. When we wanted to found a party in order to be able to gain political mandates as an IRA, the ruling parties rigorously prevented this.

Which concrete social abuses does the IRA address?

We stand up against discrimination against people, racism and the still existing system of slavery. In our estimation, about 20 percent of the Mauritanian population live as slaves. They have to work for their “Masters” without wages, without breaks and without holidays. They are denied access to basic labor rights or fundamental rights such as the right to sexual self-determination. These people are considered property by their “masters”. In the past, slaves were traded, but this is no longer accepted by society today. It is possible to free these people from their circumstances by applying enough pressure, but former slaves are also excluded from society. Because they often have no papers, they cannot find a place to live or work. We try to support these people and fight side by side with them. Many of us are liberated third generation slaves. While our grandparents were still born into these circumstances, our parents were able to give us schooling, which now helps us to fight the current situation.

You mentioned that it is possible to free people from slavery. How does this work?

In 2007, a law to abolish slavery was officially passed in Mauritania. Since then, it has been possible to complain to the governor of a province with enough force. You have to give him the name of the "master" and the slave. The governor is then obliged to send the police over and take the named persons with them. Although the law provides for at least 5 years' imprisonment for keeping slaves, the police and courts keep the "masters" unharmed. Only in one case in which I was involved did a “master” end up in prison - he was sentenced to six months.

The slaves are usually handed over to the liberators, for example our organization, because they are hardly able to make a living themselves.

Why can the slavery system be maintained even though it is now legally prohibited?

Mauritanian society is divided into different groups, which result from their descent. Most people in the country have very dark skin, but about 20 percent are of Arab descent and, accordingly, a lighter skin type. Many see this as a natural superiority. They are Muslims, like us, but many live according to an interpretation of Islam that allows slavery. In our very religious country, this acts as a mechanism of oppression, especially among the less educated. In rural areas in particular, large sections of the black population know nothing other than working for their “Masters”. So this system continues for generations. This superiority and inferiority thinking is passed on in education. As children we had no understanding of this and played together regardless of our skin color. But the older we got, the more it segregated.

How does that affect everyday life?

Virtually the entire social life, the education system and the authorities are controlled by the “master”. Laws are useless if nobody implements them. In spite of legal equality, one can speak of state oppression. This is also evident from the fact that, especially since 2014, every political protest against these conditions has been enormously criminalized. Participants are repeatedly arbitrarily arrested, detained at the police station for up to a week, and then brought to justice. There they are then put into prison without stating a period of imprisonment and released again after some time. There is no control over what happens in the prisons. So violence and even murders are sad everyday life behind bars. The police are also trying to turn political prisoners around. They are offered to be released if they subsequently publicly renounce their political beliefs and discredit the organizations through untruths. Many former prisoners are now living a good life because the government supports them in working against their former organizations. Those who cannot free themselves from their political and humanitarian convictions live very dangerously in Mauritania in the long run.

What is the background to the arrest of IRA President Biram Dah Abid in Mauritania? 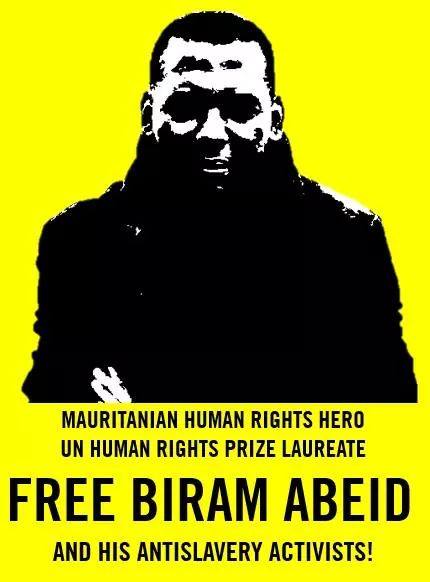 Biram was arrested at his home on August 6th. A month earlier, he had wanted to give an interview to a journalist and invited him to his home. However, the journalist was very aggressive from the start and began to insult Biram, which resulted in a dispute. At the police station, it turned out that this journalist has reported Biram about various things. On August 14, he was brought before a judge and sentenced to an undefined sentence. A week before the interview with the said journalist, Biram submitted his application for the parliamentary elections in Mauritania. We therefore suspect that the journalist's appearance and arrest are directly related. Since Biram finished second in the 2014 presidential election, he has been seen as a major problem by the government and President Mohamed Ould Abdel Aziz. During the election on September 1st, Biram was now in prison. Even though there is still no official result, there are rumors that he has got a seat in parliament. He will probably not be able to take up this mandate because of his imprisonment. We hope that injustice will not prevail in this case and that Biram will soon be free again.

We hope so as well. Thank you for the interview.