Again and again we hear that the operators of cRefugee Camps forbid residents to take photos in the Camps. We asked a lawyer about the subject. The answer is: It is legal to document bad conditions in the accommodations.
In the following we will explain the legal situation.
Can you take photos?
Yes. It is allowed to photograph the conditions in which you live. This relates to your own living spaces and shared rooms such as sanitary areas. There is no law that prohibits this in principle.
The operators of the Camps may have issued so-called house rules ("Hausordnung"). Most of the time, residents get those house rules when they move in. The House rules might state that photography is prohibited. Breaking the house rules is not against the law. In the worst case, it can lead to a warning ("Verwarnung") or termination of the rental contract.
Can you publish photos?
Basically you can publish photos of rooms and objects. If the operator of the Camp is of the opinion that the photos do not depict reality, he could file charges ("Anzeige) for defamation (§187, §188 StGB). The charge (Anzeige) is directed against the person who publishes the photos.
You can protect yourself against an Anzeige by describing the photos as accurately and truthfully as possible. For example, at which date the photo was taken.
What is not allowed?
It is not allowed to take photos, videos or audio recordings of other residents or employees (§201 StGB). Unless they explicitly agree. It is also forbidden to publish photos, videos and audio recordings of other residents or employees, unless they explicitly agree.
Nor can one spread untruths. E.g. one should not take and publish photos of broken showers when they have already been repaired.
Support from Pro Bleiberecht
Pro Bleiberecht is an anti-racist initiative. We consider the regulation, that asylum seekers have to live in Camps, to be racist and therefore demonstrate against it. We criticize the conditions in mass camps. There is no privacy and many other problems. In addition, some Camps are tumble-down or in bad conditions.
We would like to support you in making the daily problems of Camps public. We have been told again and again that criticism of the conditions by residents leads to them being treated worse.
We therefore offer that photos and reports can be published anonymously on our group's social media channels. In this case we bear the risk if the operator files charges.
We encourage you not to accept bad living conditions. Fight for your rights! Even if it doesn't seem like it sometimes: Even in Mecklenburg-Vorpommern there are people who do not accept everyday racism and racism in laws. 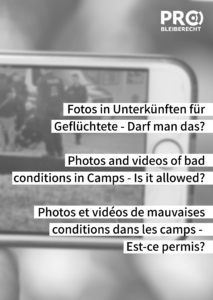