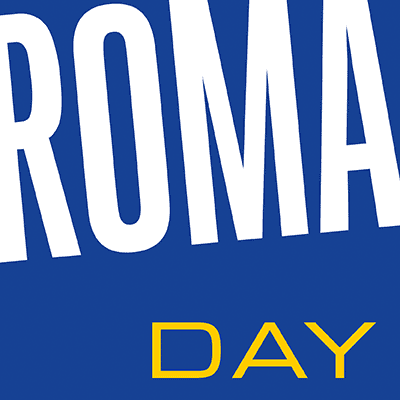 In Italy, fascists from the “Casa Pound” attacked Roma families on the outskirts of Rome two days ago. Across Europe, violence and discrimination against Sinti*ze and Rom*nja are increasing.
PRO BLEIBERTCHT wants to commemorate the Porajmos with many others on April 8th.

"Porajmos", many people do not know this term. It is the Romanesque word for "devour" and denotes the systematic genocide of the Sinti*ze and Rom*nja in National Socialism.

Away word in front: Words and pictures

Words we use are not self-contained. Every word creates a series of images and connections in our heads, which in turn influence our attitudes and thinking. "Sinti and Roma" is a self-designation. After the Porajmos in particular, it should break with the images in the minds of those who planned, carried out and silently supported the industrial extermination of the “Gypsies”. "Rom" means man in Romanesque. Sinti is a minority of the Roma, but in Germany the majority of the Roma.
Basically, the choice of words is about the attitude that one expresses and the perspective of the speaker.

Antigypsyism is called the discrimination of e.g. Sintize and Rom*nja, in which they are stigmatized as "gypsies" with associated racist attributions (e.g. that they are supposedly criminal or would not work).

Historical continuities: exclusion and persecution since the Middle Ages

With the appearance of Rom*nja in the 14th century, their rejection and expulsion within Europe began. Without rights, in part enslaved and bird-free, they were exposed to constant rejection and arbitrariness by rulers and the mob. The practice of deportation across domains already took place at that time.

At the time of the Enlightenment, Romn*ja families were destroyed in a sustained and targeted manner through forced education and disruption.

In the following centuries, in the developing nation-state and capitalism, antigypsy stereotypes functioned as stabilizing negative images, which among other things served to discipline workers and to form a homogeneous "we".

The "traveling people" was marginalized as a foreign body, Rome*nja were refused citizenship - a process that developed in Germany through the founding of the empire in the 19th century to National Socialism in the 20th century.

The persecution under National Socialism

In the Weimar Republic, the "Headquarters to combat gypsy mischief" was set up in the form in which the authority later worked in the NS. The predecessor of the headquarters in Bavaria had already started to register Sinti*ze and Rom*nja nationwide a few years earlier. The “Law to Combat Gypsy Miscarriage” was introduced by the SPD in 1929 and supported by all parties except the KPD.

Between 1936 and 1942, in the NS in the “Gypsy Family Archives”, all people who were considered by the Nazis to be “Gypsies” were centrally recorded. Data collection was only possible because a lot of information was provided at the local level, e.g. Churches, schools, etc.

The first arrests and kidnappings to concentration camps took place in 1938 under the title "Preventive Crime Control". Several thousand people ended up in forced labor or were subjected to forced sterilization. In the same year, the "Himmler Decree" Rome*nja explicitly included the Nuremberg Race Laws, in which they are not mentioned literally. The great wave of deportations to extermination camps began in 1943, mainly in Eastern Europe.

Since many of the deported Rom*nja were Christians, those affected turned to church authorities, such as bishops, at the beginning of the deportations. No reaction or support followed.

The exact number of Rom*nja who fell victim to the National Socialist racial madness has not yet been clarified. 500,000 deaths from the ideology of extermination are assumed.

Lack of processing and the demand for recognition of the Porjamos

Many of the perpetrators who abducted or murdered Rom*nja remained unpunished after 1945. Individual negotiations took place, but often the Porajmos was not the main subject of the procedure. Some institutions simply remained under a new name.

In the 1950s, compensation payments for Rome*nja were largely rejected by German courts - until 1943 they were not persecuted for racial ideological reasons, but because they were "anti-social" (sic!). Antigypsyism, like other ideologies, cannot be overcome by changing government.

In the 1960s, there were first slow approaches to compensation for those affected and their families and to the recognition of the Porajmos. Up to one a nationally and internationally recognized commemoration should pass two decades. In 1980 there was a worldwide noticed hunger strike by Roma*nja activists in the former Dachau concentration camp:

“The demands of the hunger strikers included, in particular, the official recognition of the genocide against the minority and the initiation of proceedings to hold the living perpetrators accountable for their crimes. The transfer of the earlier Nazi files to the Federal Archives was also requested. The files were still in the possession of the "race researchers", such as Professors Erhard and Arnold in Landau and Tübingen, who were still in office and dignity at the time. The participants in the protest wanted the abuse of these genocide documents to be stopped and compensation proceedings to be resumed for the survivors of the concentration camp. ”

Among the hunger strikers was Romani Rose, who is still the chairperson of the Central Council of German Sinti and Roma. In 1981, activists occupied the archive in Tübingen.
In 1982 the Porajmos was recognized as genocide by the federal government. Since 2012 there has been a memorial to the victims of the Porajmos in Berlin.

The constant insistence and struggle for their rights by Rom*nja organizations were decisive for the establishment of such a memorial. The recognition of the suffering of the hundreds of thousands who were murdered, tortured and kidnapped in Nazi Germany and the recognition of the suffering of relatives are important and hard-won achievements in memory of the Porajmos.

Despite the political recognition of the Porajmos, antigypsy prejudices and interpretations still play a role in the public debate in Germany. A study confirms antigypsy views and recording structures in the police force and one-sided images are often seen in the media too.

Current tightening of the law

These antigypsyist stereotypes were largely reflected in the debate about “poverty migration” and “economic refugees” around 2012-2015. The Federal Minister of the Interior Friedrich (CDU / CSU) significantly fueled this mood and called for, among other things, to declare the countries of Serbia, Macedonia and Bosnia-Herzegovina to be so-called "safe countries of origin".

The racist write-ups about asylum seekers from the Balkans led to all Balkan countries being declared “safe countries of origin” within two years. Contrary to the assumption of a large part of the population, the federal government does not judge the label "safe" on the basis of valid sociological facts. "Safe country of origin" is above all a political concept of struggle that is intended to reduce asylum applications from certain countries, such as currently in the debate about the classification of Georgia as "safe". Legally, if you apply for asylum, you have to prove that you are persecuted. However, it is hardly possible to prove persecution, especially if it is based on racism, antigypsyism and social discrimination.

In other European countries, the recognition rates for people from Albania, Serbia and Kosovo are meanwhile much higher. The "Safe Country of Origin" label affects many Rom*nja, particularly in the Balkans. In very few countries, their life situations can be described as structurally "safe".

The tightening of the law in recent years almost always affects people from so-called "safe countries of origin" to an even greater extent. They impose further restrictive restrictions for those affected by the asylum procedure: they have to live in collective camps until they are deported. In MV these are the "initial reception centers", in other federal states there are so-called "exit facilities". In MV their children are not allowed to go to regular schools (affects all children in initial reception centers). They are generally not allowed to work (except 80-cent jobs within of the institutions that are compulsorily prescribed by the social welfare offices.) In principle, your asylum applications are processed in “accelerated procedures.” The Federal Government's goal for this is 48 hours of processing time.

These stricter laws were not made explicitly for Sinti*ze and Rom*nja. However, the fact that the racist stereotypes on which the argument is based is so widely supported indicates how deeply racism and antigypsyism are still present in Germany today.

Roma Day commemoration is a European movement for the rights of Roma*nja. At the moment one can record the call "Roma for Europe", which works for the recognition and fight against the discrimination against the Romn*ja in Europe.

When we think of the Porajmos, we remember hundreds of thousands of victims of the fascist ideology of genocide. At the same time, we warn that this should never happen again - especially not in Germany. We are also in our thoughts with those who are currently being tortured and murdered by authoritarian regimes - while the international community is silent.

The memory of the victims of the Porajmos must be based on a critical examination of anti-Gypsy structures and actions (from language usage to police statistics).